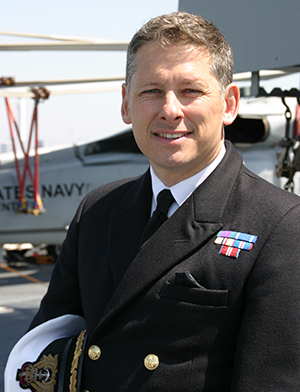 Commander Simon Staley was attached to the US fleet in Kanagawa Prefecture.

The first Royal Navy officer to be stationed in Japan to serve as liaison with his local counterparts since 1923 may have completed his tour, but the nine-month posting underlined to Commander Simon Staley the importance of Britain’s defence, political and diplomatic cooperation with Japan.

Staley returned to the UK in July and is now serving as operations officer on the Battle Staff to the commander of the UK Carrier Strike Group, based in Portsmouth. He believes that rarely in the 92 years since the last Royal Navy officer was posted to Japan has there been such a pressing need for Britain and Japan to pool their naval talents.

“It goes without saying that global challenges require global partnerships, such as this exchange”, said Staley, who was officially attached to the headquarters of the US 7th Fleet in Yokosuka, Kanagawa Prefecture.

“From my perspective, we are strengthening considerably our defence, political and diplomatic cooperation with Japan, as it takes an increasingly global outlook on security issues.

“I think the recent Strategic Defence and Security Review (SDSR) is fascinating”, he added. “It has now underwritten our vision for a secure and prosperous UK with global reach and influence in a world that is arguably more dangerous, complex and uncertain today.

“And the SDSR has set out in black and white where the UK really sees its threats, highlighting the growth of terrorism and extremism; the resurgence of state-based threats, including Russia; greater instability in the Middle East; the growing cyber threat; and challenges to the rules-based international order.

“It is increasingly clear that in political, economic and military terms, Japan is one of the UK’s allies worldwide and our closest security partner in Asia.

“I also note that, within the Asia–Pacific section of the SDSR, Japan is listed first, as one of the countries in the region that the UK will work with to defend and protect our global shared interests, uphold the rules-based international order, and cooperate with to support settlement of international and regional disputes”, he added. “The message is clear: the UK sees its relationship with Japan, at every level, as hugely important and as such is investing [in it]”.

Soon after arriving in Japan, Staley remarked on the numerous similarities between the UK and Japan.

“We are island nations with a commitment to democracy, similar economies and military capabilities, and a shared reliance on the sea for the security and prosperity of our peoples.

“Some 90% of the world’s seaborne trade transits nine key global choke points, and with $5trn [£3.5trn] worth passing through the Asia–Pacific’s sea highways annually, this part of the globe now has a major economic significance for the UK”, he said. “And this strategic alliance with Japan now gives us a sure toe-in.

“Of course, we have a lot to share with, and learn from, the Japanese and US fleets”, he added. “The position allowed me to observe and provide UK perspective and nuanced insights that may influence how we best integrate for global operations”.

Born in York and educated at the University of St Andrews, 49-year-old Staley joined the Royal Navy in 1986 as a warfare officer. He completed officer training at Britannia Royal Navy College in Dartmouth, Devon, before being selected for flying training.

After earning his wings, he served on Sea King helicopters operating from HMS Invincible in the Adriatic Sea in support of operations over former Yugoslavia.

He spent time instructing air navigation before returning to sea in 1996 as principle warfare and operations officer aboard the frigate HMS Sutherland. After operations in the Baltic Sea, the Mediterranean, the South Atlantic and as far east as Singapore, he returned to the Fleet Air Arm in 2000 and served as senior observer for 849 Squadron, flying off both HMS Illustrious and HMS Ark Royal.

He participated in operations in the Arabian Sea in 2001 in support of joint operations into Afghanistan before joining the frigate HMS Monmouth the following year. He completed the Advanced Command and Staff Course in Toronto, Canada, was promoted to commander in 2007 and served six months in Baghdad as part of the NATO-led Iraqi Armed Forces Advisory and Training team.

In May 2009, he assumed command of HMS York, a Type-42 destroyer, and led operations in the North and South Atlantic, the Southern Ocean, the Eastern Pacific and the Caribbean. He also undertook intelligence-gathering patrols off Libya during the conflict there, and delivered humanitarian assistance, extracting allied personnel from Benghazi during intense fighting on shore.

He moved to the Joint Warfare Division of the newly formed UK Joint Forces Command in 2012, and was tasked with duties ranging from joint battle-space management to power projection based on aircraft carriers.

“I think the fact that we now have regular, extremely high levels of strategic defence engagement between the UK and Japan is an open statement of our intent to establish an enduring relationship which should, in time, include formal strategic defence agreements”, he said.

“Again, from my reading and interpretation of the SDSR, the UK is strongly supporting Japan’s bid to become a permanent member of an expanded United Nations Security Council, and for Japan’s greater role in UN peacekeeping operations.

“My exposure to senior Japan Maritime Self-Defense Force officers and some influential government advisors would suggest that this support is perfectly aligned and adds weight to their recent constitutional amendment for the JSDF’s intent to take a greater role in global policing”, he added.

Since departing Japan last year, Staley said he misses “the buzz of Tokyo, the serenity of the temples and shrines” as well as sushi, ramen, cherry blossoms and Harry’s Bar in Zushi.

The liaison role has passed to Commander Graham Lovatt.