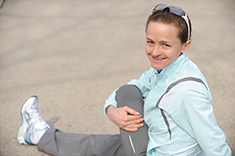 After seven years of intense training, early alarms, strict diets and a mountain of pressure, Mara Yamauchi is finally enjoying morning lie-ins and the occasional piece of cake.

Yamauchi is Britain’s second-fastest female marathon runner in history, finishing sixth in the women’s marathon at the 2008 Beijing Olympic and Paralympic Games, and second in the 2009 London Marathon. The former diplomat hung up her trainers in 2013 and now has a new ambition.

“I want to use what I learned as an athlete to inspire people to reach their goals and potential, and to get more out of life”, Yamauchi said.

She joined the Foreign & Commonwealth Office (FCO) after finishing her studies, and was posted to the British Embassy Tokyo from 1998–2002. After announcing her retirement as an elite athlete, she returned to the FCO in London, but soon changed course due to a strong desire to stay in the world of running.

Transitioning from full-time athletic life had its challenges. Many athletes, she said, struggle with identity concerns after leaving competitive sport.

“When I was an athlete, I had a single-minded pursuit in life. Suddenly that goes and you wonder why you’re here. Many athletes go through this; what you’re doing is who you are—it’s 24/7, not a 9 to 5 job”, she said.

Among other aspirations, Yamauchi hopes to encourage more young women to participate in sport. She believes active lifestyles are cultivated during childhood, and children must “embrace exercise” to make it a lifelong habit.

Though Yamauchi now lives in London with her husband and coach Shigetoshi, she recently visited Japan for the Tokyo Marathon, in her capacity as an ambassador for Japanese athletic apparel firm ASICS.

Just as she wishes to be a role model for young women, Yamauchi was joined on stage at the Tokyo Marathon Expo by Yuko Arimori, one of her own role models and a two-time Olympic medallist.

“Arimori-san still has this burning desire and is a very positive person who motivates those around her. I admire people like her who have the skills to inspire others”, she said.

In addition to Tokyo, Yamauchi has enjoyed running in plenty of other races around Japan. Topping the list is the Hagi half-marathon, in Yamaguchi Prefecture.

This race, held in December, runs through a scenic, historical town that has been beautifully preserved and boasts traditional samurai houses known as buke yashiki as well as hundreds of fragrant natsu-mikan (summer tangerine) trees.

The Kumejima half-marathon is another of her favourites. This small tropical isle in Okinawa treats participants to a fabulous post-race party, complete with awamori (a potent traditional alcohol), foot baths, folk dancing and plenty of other entertainment.

“I have a feeling that most people go for the party rather than the race! About 90% of the runners are repeaters”, she said.

Lessons for 2020
When it comes to the Olympic Games, Yamauchi feels London can provide a few lessons for Tokyo 2020.

“One really positive thing that came out of London is the profile of the Paralympics, and how the Paralympians and Olympians were treated equally”, she said.

She also highlighted how the stadiums were full for many Paralympic events, even selling out for the first time ever. The Team GB parade included both Paralympians and Olympians, all of which contributed to a better understanding and appreciation of disability and disability sport, she added.

“Before London 2012, I went on a UK Athletics training camp for both able-bodied and disabled athletes. Seeing the disabled athletes training was so valuable for me. They have a very positive attitude and just get on with the hard work. I learned so much on that trip”, she said.

The business of elite sport
One of the primary concerns of elite athletes who devote their lives to sport is ensuring financial stability. When Yamauchi chose to leave her job at the FCO in 2006 to pursue training full time, she faced the same issue.

One of the primary means of support is through sponsorships, with some companies giving funds directly to athletes and others donating products.

There is typically prize money to be won in high-profile races, in addition to time bonuses and even appearance money for competing and putting in a good performance.

In the UK, the national elite athlete support programme provides medical and nutritional aid, as well as physiotherapy and paid training camps for those who qualify. Top athletes may also be invited to special events as guest speakers, for which they are typically paid a fee.

Japan’s system is completely different. Here, major firms such as Shiseido Co., Ltd. have their own athletics teams.

Athletes are employed by companies and receive a salary, but they spend most of their time training, while working part-time. This system is very rare outside Japan, but very beneficial for athletes who want to really focus on their training, Yamauchi said.

When asked about what she misses from Japan, besides nutritious and delicious cuisine, Yamauchi emphatically praises the blue-sky, crisp, sunny days that characterise Tokyo winters.

“Training in winter is usually quite tough, but in Japan it’s perfect for running. The level of enthusiasm and commitment from runners here is also really special”, she said.