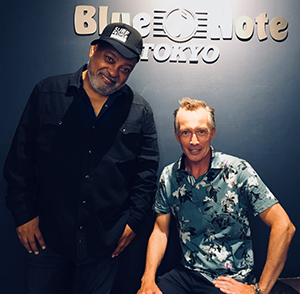 Of all the people I have interviewed over the years, Bluey from British acid jazz band Incognito is the person I have met the most over a microphone. Since the mid-1990s we have got together for a chat at least twice a year, either when he is on tour in Japan or I am in London. A man who creates positive soulful music in keeping with his character, Bluey is always a joy to be around. Our most recent conversation was in August this year, backstage at the Blue Note Tokyo.

I discovered Incognito in the early 1990s when, as a DJ with Virgin Megastores in Tokyo, we championed this new sound coming out of London. It included other notable acid jazz and soul funk artists such as The Brand New Heavies, Jamiroquai, Us3 and many more.

A momentous time in British music bound together in Camden with Dingwalls nightclub, pirate radio stations, Straight No Chaser magazine, Acid Jazz and Talkin’ Loud record labels and DJ Gilles Peterson, a driving force within it all. Bluey recalls the spirit of the community.

“Especially in London it was THE creative culture. It was the arts, it was the fashion, there was an awareness to create. Acid jazz had a lot of designers, the guys that were doing the artwork, a lot of street artists that had become legit making album covers for people.

It was that kind of feel where people were graduating from various things—style gurus, artists—and you had magazines like Straight No Chaser that featured them. They had platforms: the music; a place: locations—such as Camden Town, the Dingwalls. We had a place to spring from on a Sunday morning, everybody getting together. We had incredible DJs, dancers, musi­cians, poets, spoken word artists, all in this mish-mash. So it was a really positive movement and multicultural. Probably one of the most multicultural set-ups ever. It was amazing”. 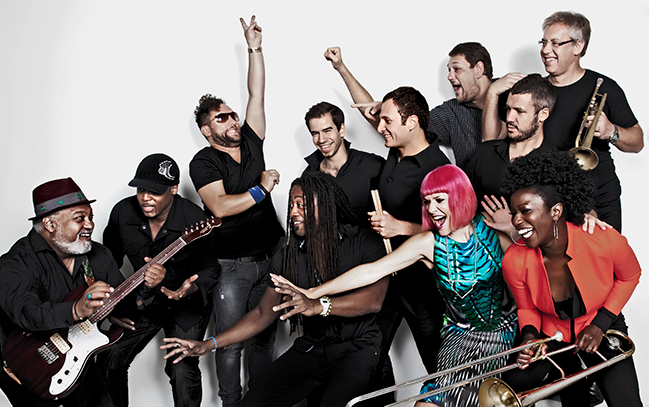 Bluey (left) describes Incognito as more of a collective than a band.

Live art
Is London still inspiring Bluey today, I wondered? “Very much so. One of my current pet projects is to promote London and the UK. I’m speaking to a drum company called the British Drum Company. I’m going to create the sound of British-made drums on the next Incognito album and it’s going to be very particular and it’s going to have a sound of all the influences of acid jazz and yet the sound of this drum is going to be all British because it’s all British made”.

He continued enthusiastically about another project. “I’ve just been commissioned for a piece that I’ve done with one of my co-writers and creative heads Ski Oakenfull. The combination of the two of us coming together caught the eye of some people in the City.

“In the square mile, where they’ve got some very interesting buildings going up, we’re com­bining art, architecture, sounds and music that you can only hear in those surroundings. On the roof they’re going to have live art and music in the building. Designers are coming together with street artists, it’s incredible”.

This conversation triggers childhood reco­llections in Mauritius, where Bluey was born. “One of my earliest memories is sound and architecture because the house that we lived in, the kitchen was outside, and in Mauritius you could get rain at any time, and we needed to cover that area.

“They told me I used to get really excited when the rain would fall on these things, and I would sit underneath and lie down on the kitchen floor and listen to the sound of the falling rain on the corrugated iron. For me that is my earliest music—rhythm and music created by rain on the ceiling, and I’ve always kept in touch with that”.

Sense of community
Industrious and creative as a young boy, just as he is today, Bluey shares more from his childhood. “I would use those same sheets of metal later. Between the age of five and eight I actually had a band, but everything that was played was created by me—from tin cans to plastic containers, oil drums, old rusty sugar cane utensils that they used to stir the pots of molasses, fishing tackle left at the beach that I would stretch over shoe boxes to create string instruments.

So now, being in London and being com­mission­ed to do music for a building, it’s subtle stuff but it connects really well”.

As in his childhood, Bluey has always brought musicians together and has said that Incognito is more of a collective than a band. He wants to build a sense of community and a home where his “family” of musicians are always welcome. The seeds of community were no doubt sewn being raised by extended family. 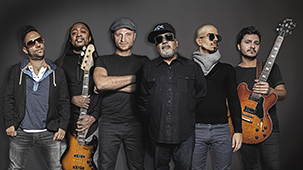 Bluey’s side projects are also created to nurture musicians—Thames River Soul brings together London-based musicians and Citrus Sun (spontaneously named one morning in his kitchen, as he looked out the window at the glorious morning sun and at the citrus washing up liquid sitting on the sink) gives the Incognito rhythm section the chance to perform more instrumental-based live shows.

Bluey tours the world with his bands, signs young singers in different countries to his record label, gives inspirational talks at colleges in the US and has built a loyal following of fans in Japan and tours here every year, performing at the iconic Blue Note Tokyo. He has a soft spot for this country and the people, not least because of his Japanese wife.

But Bluey is definitely at home in London and each time I’ve interviewed him there, the location has been significant—a soul pirate radio station dedicated to keeping British soul on the air, the “hallowed ground” of Ronnie Scott’s legendary jazz club in Soho and more personally a tour of Bluey’s manor, in Stoke Newington in north London, where we explored the streets and lunched at his favourite local Junior’s Caribbean restaurant.

London has seeped into Bluey’s soul and music and, in return, his positive soul has seeped into the music fabric of London. He is a valuable gem in British music and one of the country’s most inspiring cultural ambassadors.

BIOGRAPHY
• Born 1957 in Mauritius
• Full name Jean-Paul Maunick but, from the age of 12, has gone by his school nickname Bluey
• The son of Mauritian poet Edouard Maunick
• In the mid 1960s, aged nine, moved with his mother to the UK
• In late 1970s, founding member of jazz funk band Light Of The World in London
• In 1979, formed acid jazz funk band Incognito