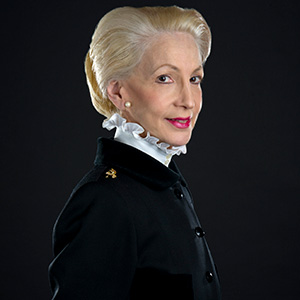 Lady Barbara Judge CBE was once described by BBC Radio 4’s “Woman’s Hour” as the best-connected woman in Britain. She has seen a number of achievements across her career, leading to her CBE appointment in 2010 for services in the nuclear and financial industries. She is the first female chairman of the Institute of Directors, chairman emeritus of the UK Atomic Energy Authority (UKAEA) and chairman of the UK’s fraud prevention service Cifas.

Judge has been visiting Japan since the 1980s, when she first visited as a commissioner for the US Securities and Exchange Commission. At that time she personally negotiated with the Tokyo Stock Exchange to open the bourse up to foreign members. Her home is filled with Japanese porcelain and her love for Japan’s culture and fashion, in addition to her work, has brought her back many times.

BCCJ ACUMEN sat down with Lady Judge when she visited Tokyo in June. She was here to attend a periodic nuclear reform meeting of Tokyo Electric Power Holdings, Inc.’s (TEPCO) independent Nuclear Reform Monitoring Committee, of which she is the deputy chairman.

How are the UK and other nations helping TEPCO in terms of nuclear reform, and what challenges do they face?
The UK was the first country to develop civil nuclear power, and we have been experts at it for many years. At the moment, we do not have our own technology, but our supply chain firms are experts in all types of nuclear installations and they can work on any kind of technology.

We have a great number of firms—Atkins, Arup, Cavendish Nuclear, Rolls Royce—that are experts in the building and operation of nuclear power plants, and then there is Pell Frischmann, a most impressive firm, which project manages infrastructure projects all over the world. Their expertise in helping build and operate big infrastructure projects is very much needed in Japan.

The Office of Nuclear Regulation promotes the highest safety standards and the UK Atomic Energy Authority, when it was in existence, was the
world-leader in decommissioning nuclear power plants. So the UK is filled with expertise that the Japanese need now, and we can, and are, helping them to deal with the challenges of Fukushima.

We are providing the water management service that they are using, and advice to the Nuclear Regulation Authority. Lloyds Register is engaged in a big project assessing and validating the safety of various parts of the machinery used for decommissioning. They are real experts and the Japanese are very appreciative.

What are the implications of the UK’s withdrawal from the European Atomic Energy Community (Euratom), particularly for UK expertise in Japan?
As with so many areas of Brexit, the detailed work on what leaving Euratom would mean has barely begun. It is vital that the British Government negotiates a transitional agreement to keep the UK in Euratom while a new cooperation agreement is settled, which will probably take longer than the 20 months between now and the UK’s scheduled exit from the European Union (EU).

In the long-term, the UK will need to renegotiate nuclear cooperation agreements with countries such as Japan, who we currently have access to through Euratom, and make sure people with the nuclear-specific skills can easily travel to and from the UK.

These steps are essential to prevent the UK from losing its place as a world leader for investment in nuclear research, and leave ongoing projects such as Hinkley Point C stalled in a no-man’s land of uncertainty. Whatever happens with the UK’s new relationship with the EU, we will still be dependent on the continued free flow of nuclear materials and skills between the UK, United States, Japan and other countries who are parties to Euratom.

I believe that corporate governance is making great strides in Japan. Beginning from a standing start, in two or three years, many firms have adopted all or part of the new corporate code that has been recently promulgated. Many firms are using the “governance by committee” system, which is the Japanese way of giving power to the nomination, audit and remuneration committee.

It is good to see that the British have played an important role: we are a model, we are advisors and we are respected.

Is Japan doing enough to help women in business and leadership?
Sadly, the way the Japanese tax system works is that if the spouse—in most cases the wife—makes under a certain amount of money, then the couple will receive financial benefits. This law has been criticised for its effect of lowering women’s motivation to work, as it can be a real disincentive.

In addition, the cost of childcare is prohibitive, but more than that there are not enough people to do the job. In most countries, there is a group of people who want to be carers and are good at it. The lack of immigration in Japan is a real problem, especially in this society where women are not only expected to take care of the children, but they are also expected to take care of their in-laws. Women have a double-barrelled obligation and hardly any help.

Finally, the culture of business is not women-friendly. Very long hours and long drinking bouts are not helpful to women who want to do their jobs and then go home. Additionally, Japan is a country where you can only ascend the corporate ladder if you know the bosses and you go drinking with them. Women can’t even get in the game.

So I believe that initially the Japanese must do all they can to amend the tax system. I also believe that visas should be available for people from other countries that are “caring” visas, and if they do not want permanent immigration, they should provide short-term stays.

Furthermore, I believe that when the train stations are revamped, they should include 24-hour childcare centres. This is the only country that is safe and clean, where this idea could work. I would be glad to leave my own child at such a centre knowing that they were safe.

Indeed, if you could put those carers and those centres together, you could let every woman who wanted to work, work. After all, Japan has such a declining population that it needs all the brains it can get. Remember that half of the world’s brains are in 100% of the world’s women.

What impact do you think Brexit will have on the UK’s relationship with Japan?
The UK was a trading nation before creation of the EU, and it has the potential to be a great trading nation again. We have great resilience, huge creativity, many impressive firms that do business around the world, and we understand global business very well.

The British are used to taking a long-term and a global view of trade. Brexit is going to mean things are uncertain, but we have already proved with respect to Japan that we are intent on keeping the Japanese doing business in Britain—the car industry is very important to the UK, and the UK has already told the Japanese that they will look after them. It has calmed a lot of fears and the Japanese have made a number of investments recently.

Japan and Britain have a special relationship. We have a great deal in common with Japan: We are both island nations. We are both trading nations. Neither of us has a great deal of natural resources, but we have many personal resources, and it is appropriate that we be in partnership and be good and thoughtful partners.