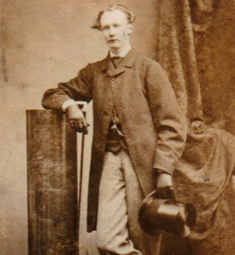 James Campbell Fraser, a Yokohama resident (1861–68), sent photos and papers relating to the game to the MCC.

Internet resolves confusion behind colourful history of cricket in Japan

In June, the quintessential English game of cricket will become the first major Western sport to hit the 150-year mark in terms of documented matches.

Records and photographs related to the first cricket match played in Japan were discovered last summer. They indicate that the game took place in June 1863, between the Royal Navy and a team of Yokohama civilians.

Rumours of a game played in 1863 had not been substantiated earlier. So, it had been said that the first cricket match in Japan was the Garrison vs. Royal Navy match, reported in the Japan Herald (12 November, 1864 issue).

Further, according to the Collected Writings of Sir Hugh Cortazzi (1999), “The first cricket match in Japan was held in 1864 between the Army and the Navy”. The four innings’ totals in the Herald story match those mentioned by Cortazzi.

Perhaps the most remarkable feature of the rediscovered match was that the players wore revolvers, or had weapons close at hand.

Polar explorer Sir Albert Hastings Markham KCB (1841–1918), who played for the naval team in the match, was quoted in Cricket magazine (16 April, 1908) as saying, “It is, I suppose, the only match on record in which the players had to be armed”.

The writer states the article was based on papers and photos sent to the Marylebone Cricket Club (MCC) by James Campbell Fraser, a Yokohama resident (1861–68), who captained the Yokohama team.

Fraser’s account begins, “It took place in the year 1863 in Yokohama”, and goes on to explain that the few Europeans there were often warned that they would be killed, but laughed off such threats.

One day, however, British Chargé d’Affaires Edward St. John Neale warned foreigners that they would be attacked by masterless samurai “on a certain day” that, historical records suggest, was 25 June. This day was set to kill any foreigners who had ignored the expulsion order issued in the name of the government.

Neale advised the Englishmen to evacuate to China, but they would do so only if the British government guaranteed them against any losses. Neale was unable to promise this, so the Britons decided to stay and defend themselves if attacked. The presence of Royal Navy ships in the Yokohama harbour offered some peace of mind.

As the “certain day” approached, Fraser wrote: “The native population of Yokohama, including the servants, cleared out bag and baggage. This meant that no business was to be done, and the Englishmen naturally wondered how they should pass the time, for they dare not leave the settlement and go into the country. A cricket match was suggested and a challenge sent to the fleet”.

“A small force armed with rifles was landed from the men-of-war for protection”, wrote Fraser, “and they played with their revolvers on, ready for any emergency. It was a most novel sensation for the wicket keeper, as he carried his revolver backwards and forwards from wicket to wicket and placed it behind the stumps. Fortunately, no attack took place either on that day or afterwards, and very soon the native population began to return”.

Although Fraser provided all the players’ names, he didn’t give the scorecard, or report who won the game. But, on reading Fraser’s account, Markham notes, “You have omitted to mention the fact that the naval team gave you a ‘jolly good licking’”!

The match was discovered on the Wisden Cricketers’ Almanack website that states, “[Rawson] played in the first ever cricket match played in Japan, being a member of the Fleet team which beat Yokohama in 1863”.

Just 18 years old in 1863, Rawson’s career was already on the rise, following his exploits during 1861 troubles in China. He went on to become a noted admiral and finished his working life as Governor General of New South Wales (Australia).

His biography includes a team photo that bears the caption: “The naval side in the first cricket match played in Japan. The ground was guarded by troops and the players had arms handy”. However, no reference to the match is made in the text.

The belief in the correctness of the date of the first match was reinforced on discovery that Fraser had attended Harrow School.

In a school register entry for Fraser, the following statement appears: “[Fraser] captained the Yokohama side in a cricket match (Yokohama vs. The Fleet), played under curious circumstances at Yokohama in 1863 (see Cricket, April 16, 1908)”.

The words “curious circumstances” and “See Cricket, April 16, 1908” were tantalising. However, internet searches yielded nothing, Harrow School’s archivist was not able to help, and the British Library catalogues show no such publication. Moreover, there seemed to have been no magazine in 1908 called Cricket!

That said, an enquiry to the editor of Wisden Cricketers’ Almanack confirmed that the publication had existed for a few years and suggested a check with Lord’s Cricket Ground.

The issue was soon located and the relevant article containing a description of the “curious circumstances” was forwarded.
The article mentions that Fraser had sent the MCC photographs and papers. When a Lord’s library employee searched the cricket ground’s memorabilia room, an original framed photo of the Yokohama team was located.

The photographs of the two teams must be the earliest of Western sports teams in Japan and, indeed, among the oldest taken here. It appears that there are no other photographs of cricket teams taken before the first cricket Interport matches played between Yokohama and Kobe in 1884.

The most obvious reason the 1863 game was “lost” is that no newspapers from those troubled months survived.

Another reason might be that Mollison—known as the Scotsman who introduced cricket to Japan in 1868—chose to ignore the game and his former boss in his writings and speeches. In one speech he simply said: “ … I have been told even cricket matches were played [on the Parade Ground] before my time … ”. 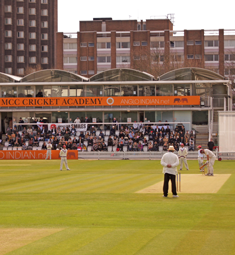 The JCA started their 150th anniversary cricket tour of England and Scotland on 27 April. The men’s team played six games, including a match against the Marylebone Cricket Club (MCC) at the Nursery Ground of Lord’s Cricket Ground—the first match Japan has ever played at the home of cricket—and three games in Scotland.

The women’s team—winner of the bronze medal in the 2010 Asian Games and currently ranked 13th in the world—played five matches.

The men lost all matches but performed well against some very strong opposition, while the women’s team beat Scotland in one of their games.

The Scottish Conservative Party is a big supporter of the JCA and its Cricket for Smiles initiative, which has been providing relief to Tohoku since the Great East Japan Earthquake.

A 150th anniversary cricket festival, including a re-enactment and dinner or BBQ, is being planned for 22 June at the Yokohama Country and Athletic Club—founded in 1868 by James Pender Mollison.