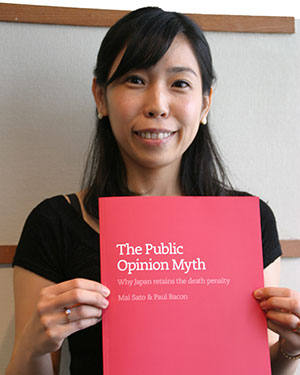 The Japanese government insists that a staunch 80% of the public supports the death penalty for heinous crimes, although a new study by British and Japanese academics contests that claim.

Authored by Dr Mai Sato, who holds a PhD from the Dickson Poon School of Law at King’s College London, and Paul Bacon, deputy director of the European Union Institute in Japan at Waseda University, The Public Opinion Myth: Why Japan retains the death penalty indicates that, in contrast to government statistics that purportedly show overwhelming backing for retaining execution as the punishment of last resort, the Japanese public happily would go along with abolition.

She has taken up employment as a lecturer in criminal law and criminology at the University of Reading this month.

Sato spoke with BCCJ ACUMEN about her research into the death penalty in Japan.

BCCJ ACUMEN: Which of your statistics contrast most with the government study?

In other words, 80% of the population take the death penalty for granted, but are not necessarily embracing it. And our parallel survey shows that of these retentionists, 71% said that if the government decided to abolish the death penalty, they would accept that as official government policy. Again, this suggests that acceptance of the death penalty is a default position, rather than active support of it.

Why is support so strong in Japan?

To begin with, I’m very dubious about the headline results that the government gives for support and I see it more as backing for the policy by default. But beyond that, Japanese people have grown up in a death-penalty state and their society is relatively safe, so they believe the legal system is working.

For Japanese people, the death penalty is a distant topic that has little to do with their everyday life, and is not something they spend time contemplating. When they are asked in a survey about the death penalty, retention is the default position to fall back on. The government does not appear to be interested in understanding the nature of public support for retention.

Is opposition to the death penalty building?

It is still very weak partly because there is a very limited non-government organisation (NGO) base in Japan. Perhaps the only organisation that gets significant support is the victims’ rights group, which tends to support retention rather than abolition.

It surprised me when I first went to Britain to find so many penal reform charities. And perhaps because Japan is still a homogenised country, I feel there is a lack of understanding of people who are marginalised or socially excluded—including offenders.

Which of the report’s findings surprised you?

One surprise was that abolitionists did not always hold humane attitudes; some suggested that convicted offenders should be tortured. Another interesting finding is that expressions of remorse by the offenders were considered more important than the possibility of rehabilitation.

Why do they want hanging abolished?

Our parallel survey shows that the majority thought it is better to have the criminal live and repent. The second reason was concern over miscarriages of justice, while the other reasons given were that the state does not have the right to kill, that killing is against the respondent’s morals, or they were opposed on religious grounds. It is also interesting that, while abolitionists often hold their views for what might be termed enlightened or liberal reasons, in Japan, many opponents of the death penalty say execution gives the criminal an easy way out, and that life in prison is a harsher punishment.

According to your research, why do Japanese people want to retain the death penalty?

This suggests to me that people who really support the death penalty do so because they want an ultimate form of punishment. It is also interesting that there has been a dramatic change between the government survey, carried out in 1967, and the 2014 study. In 1967, the top reason for retaining the death penalty was that serious crimes would increase if it were to be abolished, but consideration for families of the victims was last of the four reasons given.

Has the death penalty been shown to reduce crime rates?

The academic consensus is that it is just impossible to prove either way.

Do you believe Japan will ever abolish the death penalty?

I don’t know. Japan is unique in the sense that, internationally, not many people know that it still has the death penalty. They see Japan as a safe and steady democracy; the people are gentle and polite; and it has great food. Even when Japan does carry out an execution, international NGOs are not as harshly critical as when it happens elsewhere.

Professor David Johnson at the University of Hawaii has drawn parallels between the death penalty here and Japan’s whaling programme. Essentially, Japan seems able to get away with it because it claims both executions and whaling are a historic and cultural part of its society. And while many East European states abolished the death penalty in order to join the European Union, there is no such pressure on Japan. So there is a lack of incentive for change here. 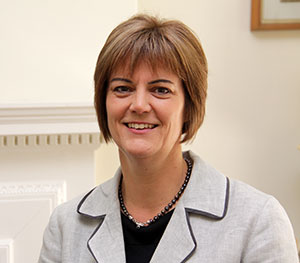 The UK is a good friend of Japan, which is a close and respected democratic partner.

As with all such partners, we believe in having an honest exchange of views. While we agree on many issues, we do have different views on the death penalty. The policy of the UK, and indeed of the European Union (EU) as a whole, is to oppose the use of the death penalty in all cases.

The case of Iwao Hakamada has made headlines around the world. While his case is still under appeal, the court decision in 2014 to release him and order a retrial—after he had spent 45 years on death row, having been found guilty of four murders—is a salutary reminder that no legal system is perfect. Under the death penalty system, mistakes or miscarriages of justice are irreversible.

This thought weighed heavily with me when I had the honour of meeting Mr Hakamada and his sister earlier this year.

In the UK, parliamentary and judicial leadership led to the abolition of the death penalty. We are keen, with our EU colleagues, to help promote a more informed debate in Japan about the issue. But at the end of the day, any decision to change the current system is one for Japan itself to take.