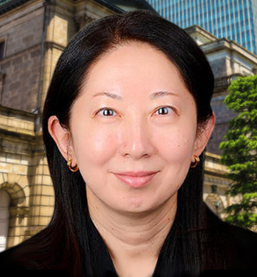 In what is widely seen as a boost for gender equality, Tokiko Shimizu was appointed in May as the first woman executive director of the Bank of Japan (BOJ) since it was founded in 1882.

She will serve a four-year term as one of six executive directors who oversee the daily opera­tions of the bank, which include financial markets, monetary policy and economic analysis.

Shimizu, 55, joined the BOJ in 1987 after she had graduated from the University of Tokyo with a degree in engineering.

She also holds a master’s degree in interna­tional policy studies from Stanford University and has worked in foreign exchange and financial markets, as general manager for Europe and chief repre­sentative in London. In 2010, she became the first woman branch manager, at the BOJ’s Takamatsu branch.

Congratulations on becoming the BOJ’s female executive director. What will your roles and responsibilities be exactly?

In official terms, the executive directors shall, in accordance with the decisions made by the gover­nor, administer the business of the BOJ assisting the governor and the deputy governors. My respon­sibilities are, basically, to administer the business of the Nagoya Branch as the general manager, but I am also responsible for other businesses of the BOJ as one of the executive directors.

What do you think will be your biggest challenges?

As I have already been the general manager of the Nagoya Branch for two years, the challenges will not immediately change. For the economy of the area I cover, consisting of Aichi, Gifu, and Mie Prefectures, the most immediate challenge is how to return the economy of the area to its usual strength and vitality, while at the same time maintaining control over the Covid-19 situation. This area is the very heart of Japan’s manufacturing industries. We need to monitor closely developments in the industries’ production and investment, as well as demand and supply conditions in the labour market. Those movements will determine the robustness of the recovery of Japan’s economy. 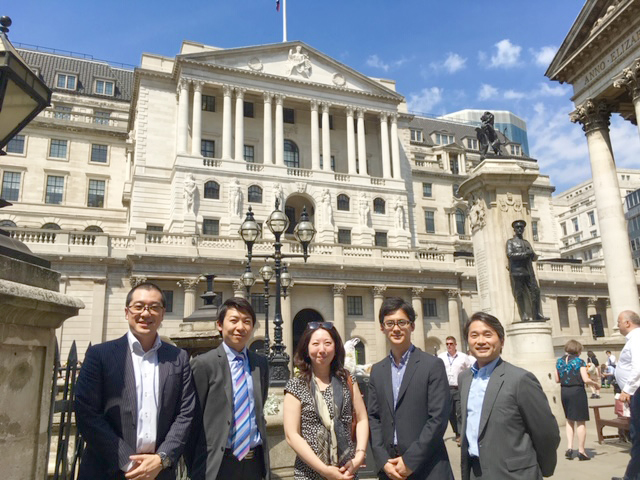 Shimizu with fellow expats in front of the 16th century Royal Exchange in central London.

What are you most looking forward to?

As one of the executive directors, I would like to pay more attention to our relationship with the people outside our immediate circle and with global stakeholders, and I am looking forward to enhancing these networks of communication and exchange. Monetary policy is setting out into uncharted waters, and the world economy has changed its structure and the mechanism by which growth may be ensured. Central banks must review our responsibilities ceaselessly, and we need to be well prepared, determined and confident to meet whatever challenges the future may bring.

Tell us about your experience as the general manager for Europe in London.

From 2016 to 2018 was the second time for me to work in London. The first time was 2008–2010. You may have noticed that both were somewhat unprecedented periods for the UK and the world. Many of my friends in London begged me, “Please do not come to London again because, whenever Tokiko comes, something bad happens!”

To maintain control during such uncertain times, I worked closely not only with the Bank of England but also with colleagues in Whitehall, Westminster and Brussels. I was so impressed by the efforts many colleagues made to ensure closer commu­nication internationally as the situation became more uncertain. Based on the informa­tion we got through such communications, my colleagues in the Japanese financial community in Europe were successful in becoming well prepared for Brexit.

I also enjoyed playing golf with my friends almost every weekend!

How do you feel becoming the BOJ’s first female ED?

No one can build a career in a traditional organisa­tion without an accumulation of basic achieve­ments during the course of promotions. I myself regard my career as the consequences of a number of choices made over the period of a 33-year working life. I do not have any feelings specific to becoming the first female ED, but it does give me confidence in the steps I have taken over my years spent at the BOJ.

What advice do you have for aspiring women leaders in Japan?

I believe the most important thing for a person to achieve their goals in their career is for them to make steady progress based on secure foundations, and to make sure that the path they choose is one that brings meaning to the world. If there is a gap between men and women to make a robust step through their career, it might be harder for a woman to be a trustable person. Trust cannot be earned in a day, but by proving one’s ability to maintain quality of results over many years—and by being always prepared for challenges that are more difficult—trust will certainly be deserved.