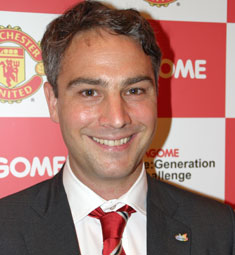 Jamie Reigle is managing director of the Asia-Pacific region for Manchester United Ltd.

Thunder, lightning and a torrential downpour were not enough to dampen the spirits of 250 children from the disaster-hit Tohoku region when they took part in the Kagome Re: Generation Challenge 2013 with Manchester United FC at the Nissan Stadium in Yokohama.


The children and their guardians had been invited by Kagome Co., Ltd. to take part in a football experience session on 23 July at the Shinyoko Football Park as part of the kick-off event held before the match.

The joint event was the latest arranged by Kagome to promote health, exercise and the renewed vitality of communities that were devastated by the 2011 Tohoku earthquake and tsunami.

After the session, the children from Fukushima, Iwate and Miyagi prefectures were to meet Sir Bobby Charlton. The British soccer legend captained United to the club’s first European Cup in 1968 and was presented with the Order of the Rising Sun by the Japanese government in 2012 for his “outstanding contribution to promoting cultural exchange between Japan and the UK, and to the development of football in Japan”.

Appalling weather scuppered the planned meeting, but the youngsters were still able to see Charlton when he stepped out onto the stadium pitch at halftime.

To their great delight, the children and their guardians were given free tickets to attend the match, which the home team won 3–2 with a late goal.

But the result of the game was less important than the growing partnership it has helped to boost between the winners of the 2013 English Premiership and one of Japan’s most forward-thinking and innovative firms. And this enterprise has tomatoes and vegetables at the heart of its healthy food and beverage concept.

“We have links with several Japanese firms, but the partnership with Kagome is a very important one to us”, said Jamie Reigle, managing director for the Asia-Pacific region for Manchester United Ltd.

“It’s a mutual selection process when we look for partners, so we chose each other”, Reigle told BCCJ ACUMEN. “We spent a lot of time talking with Kagome to find out how we can best work with them, to learn about the company and their history of developing innovative products.

“I understand that Kagome produces as many as 300 items per year, and that their philosophy is based on health”, he said. “Healthy living and hard work are values that we very much share with Kagome”.

Founded in 1899 in Nagoya, Kagome became one of United’s official partners in Japan in October last year and regeneration—of both human health and areas affected by the triple disaster—has been their core shared theme.

He also took part in a five-day soccer school for 160 children from Fukushima, Miyagi and Iwate prefectures later that month.

For youngsters from Fukushima, the training session was an opportunity to play outside without fear of being exposed to elevated levels of radiation from the Fukushima Daiichi Nuclear Power Plant.

While the children were training, Kagome gave their parents and guardians information on diet and good eating habits.

Speaking after the Yokohama game, Manchester United manager David Moyes paid tribute to Kagome’s efforts to help the areas of Japan affected by the disaster.

“Kagome’s regeneration project was a very good reason for us to come here and play this match, and we were delighted to be able to play here tonight”, Moyes said.