What has British Airways done to help in the aftermath of the 11 March earthquake? 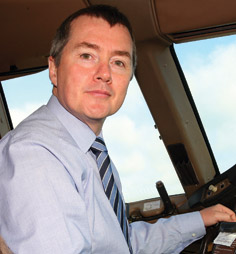 One of the main reasons I have made this visit to Tokyo is to express, on behalf of everybody at British Airways, our sympathies to the people of Japan on the occasion of this terrible tragedy, as well as to demonstrate our confidence in Japan and to show that we will do whatever we can to provide assistance during this very difficult period.

Do you plan to extend further assistance in the future?

We are developing some plans and will continue to liaise with all the relevant authorities, but the immediate issues are helping with the humanitarian relief efforts.

We believe we can assist in again promoting a bridge between the UK and Japan. It is to be hoped that we will be able to help UK and Japanese businesspeople to travel between the two countries.

I believe that one of the key issues is the re-establishment of business confidence in travelling to Japan and doing business here, given the way the problems with the nuclear power station have been portrayed in the media.

How has this disaster affected your operations in Japan and the Asia-Pacific?

We have not cancelled flights and we have tried to maintain a full schedule. In order to maintain a robust operation, we are currently operating our services to Tokyo via Seoul’s Incheon Airport. We hope to re-establish direct links as soon as possible.

Can you discern any longer-term implications for the industry in this region?

I believe that these tragic events will have a short-term impact and discourage some people from travelling, but I’m confident that the industry will recover in due course. British Airways is in Japan for the long term; we have a lengthy history of doing business here and we are absolutely determined to continue to have a strong presence in Japan.

How are talks progressing on closer ties with Japan Airlines?

We have a good relationship with JAL, which we have strengthened over the past year. I have taken the opportunity, while in Tokyo, to meet Chairman Dr. Kazuo Inamori and President Masaru Onishi. We are looking at opportunities for deepening the relationship and the possibility of a joint business similar to the networks we have established with American Airlines and Qantas.

How is the broader global situation for this industry?

Another area that is attracting everybody’s attention is the instability and uncertainty in the Middle East and North Africa. That is having an impact on the price of oil, which is a challenge for all airlines.

The concern is whether the high price of oil will dampen the economic recovery that we have seen in 2010 and 2011. I’m personally optimistic that we will continue to see improvement in general economic conditions, but high oil prices are something that I would prefer to see resolved sooner rather than later.