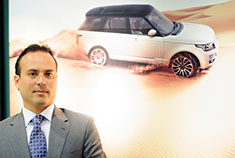 The business has experienced strong sales in its Land Rover lines.

The sleek lines and burnished orange paintwork of the F-TYPE coupé were already turning heads outside the Tokyo headquarters of Jaguar Land Rover Japan Ltd. Then, the 5-litre supercharged V8 engine was lit up, and necks were craned as onlookers sought the source of the deep, throaty roar.


The F-TYPE, it is fair to say, commands attention. In that respect, the latest addition to Jaguar’s stable is continuing a long and respected tradition of no-holds-barred quality, but the arrival of the F-TYPE in the country is just the start in the firm’s ambitions for the market here.

“We feel that we are capable of achieving a great deal in Japan”, said Magnus Hansson, who, in November, was appointed representative director and chief executive of the firm.

“Our aim is to continue to make the brand as relevant as possible”, he said. “This is a brand that appeals to consumers who have a very high taste for vehicles, and we are looking to develop the Jaguar name here”.

Given that Japan already has an impressive automobile industry, and a reputation for quality and reliability, it could be argued that Hansson will find it difficult to further raise the profile of both Jaguar and Land Rover here. But he is confident that the country still offers plenty of opportunities for vehicles that are streets ahead of the competition.

“Yes, Japan has a very strong domestic auto industry and those companies control the majority of the market, but there has always been a part of the market with a strong interest in imports, particularly at the high end of the sector”, 39-year-old Hansson told BCCJ ACUMEN.

“You don’t really see cheaper brands of imported cars on the streets of Japan, so there is a clear desire for [high end] brands”, he said. “Many of those are German cars, but we believe Jaguar is very different”.

The firm’s rivals may make cars that are outstanding examples of engineering, Hansson explained, but they are purely machines. Jaguar, meanwhile, is a far more human creation, and has a sense of warmth.

Moreover, the advertising campaigns—most recently the global “It’s Good To Be Bad” series to promote the F-TYPE—benefits from a good slice of British humour. That’s not something our German friends have ever been accused of having.

A two-seater in the classic racing style, the F-TYPE has received a warm welcome among people who know their cars.

“We could not have been more pleased at how it has stacked up against the Germans”, added Hansson. “It’s the real deal”.

Vehicles with the distinctive big cat leaping from their bonnets can trace their heritage back to 1922. They have become a byword for performance, sporting excellence and authenticity, all wrapped in luxury.

“The Japanese buyer of a Jaguar is, at heart, a driver of a performance sports car, but one that is complemented by refined elegance”, he said.

The Japan market for Jaguar has shrunk from a sales peak around a decade ago, Hansson admits, but that is primarily a result of the discontinuation of the X-TYPE. A compact executive car, it was produced between 2001 and 2009 at Halewood Body & Assembly, the firm’s production facility near Liverpool.

The car was especially popular in Japan, thanks in part to its trademark excellent ride, handling, grip and styling, as well as because it was a perfect size for roads here.

Without a ready-made replacement to step into the void once the X-TYPE reached the end of the road, Jaguar’s sales in Japan fell. But, that is set to change with the launch of the Jaguar XE next year.

“It is not a direct replacement for the X-TYPE, but it will re-establish our presence in that sector, and I’m very much looking forward to having the car available here”, Hansson said.

Unveiled in September, the XE will be on the market in Japan in the first half of 2015. The firm has revealed that 75% of the bodyshell is made from lightweight aluminium, making the 2.0-litre Ingenium diesel car extremely strong, and capable of more than 32km/l, with emissions of a mere 99/km of carbon dioxide.

The firm will also be launching a new variety of Land Rover—the Discovery Sport—in Japan in the coming months. Hansson expects the new arrival to build on what has been “a phenomenal rate of growth” for the vehicles here.
“[Land Rover] is a very strong core brand, but we have a couple of products that are really great, and ideal for Japan”, he said.

The Range Rover Evoque, which has been a smash hit globally, has done exceptionally well in Japan, Hansson explained, with many people buying into the concept of the vehicle.

“These are the [vehicles of] choice for people who see themselves as pioneering, and more into the outdoors lifestyle”, he said. “Even though they might not need to conquer the jungle every day here in Japan, it’s an emotional reaction and attachment”.

Jaguar Land Rover has found that it is not unusual for the owner of either of their brands to be so impressed with their new purchase that they come back to buy the sister vehicle: Jaguar for weekdays around town; Land Rover for weekend expeditions further afield.

No matter how good the product is, however, Japan will always pose some special challenges to foreign firms operating here. Hansson identified the extensive “uniqueness of the regulatory environment” as an issue the firm finds itself required to overcome. The nation’s business culture and practices can also be a hurdle for anyone not brought up in the car industry here.

On a more personal note, Hansson is studying Japanese hard, in order to be more able to communicate with customers, stakeholders and staff. In the meantime, he is relying on an experienced staff in an organisation that has been on the ground in Japan since the 1970s.

With rapid advances in technology in the auto sector serving to level the playing field in the upper echelons of the market, Hansson believes that brand and emotional attachment to that marque will increasingly serve as a key differentiator.

“Japanese consumers care deeply about authenticity, and have a real appreciation for brands that meet that standard”, he said.

“If a consumer only ever thought with the logical half of his or her brain, then they would always buy a Japanese car”, he added. “But that’s clearly not the case; there is a huge appetite here for imported European brands that are rich in heritage. It is up to us to make that emotional connection”.