Appointed Ambassador of Japan to the United Kingdom on 11 January 2011.

Please tell us about your history with the UK.
The UK is the first foreign country in which I lived. In 1973, I spent three months on a homestay in Folkestone at an English-language school. I had an enormously fruitful and enjoyable time and, what is more, the experience turned out to be decisive for my future as a diplomat; my teacher happened to be the wife of a retired British diplomat and would often talk fondly about their overseas experience and strongly encouraged me to pursue a diplomatic career. I followed her advice and joined the Foreign Service the next year. I was posted to the embassy in the UK from 1996 to 1999 as a political minister.

Have the British become more understanding of Japanese people and more interested in Japan’s culture since you first encountered them?
Yes, they have. Numerous events to introduce Japan have been held here, varying in size and content. I attended the Japan Matsuri 2010 at Spitalfields Market, which attracted 50,000 people. Meanwhile, about 20,000 people in the UK were studying Japanese in 2009—the largest number in Europe and an increase of 32% over 2006.

As for cuisine, there are now four times as many Japanese restaurants here as five years ago. It is also highly noteworthy that, since 1987, we have sent about 10,000 UK nationals to Japan on the Japan Teaching and Exchange (JET) Programme, in which young British people work for up to five years as assistant language teachers at Japanese schools, or as coordinators of international relations in local governments. Furthermore, the number of reciprocal visits by tourists in either direction and students has increased steadily over the years.

How has Britain changed since you first arrived there?
If I consider my experience in 1973, it was a different world. There was then a stereotypical image of an ailing, old empire and there were far fewer foreign cars. The pound sterling was worth more than ¥600, nearly five times more expensive for Japanese than now. To me it was the country of the Beatles and the recent FIFA World Cup champions. By 1996, Britain had been reborn and was flourishing again.

As for how things have changed between my first official posting in the UK and now, my principal observation is that, between 1996 and 1999, there was a change from Prime Minister John Major’s government to that of Prime Minister Tony Blair, namely from the Conservatives to Labour. This time there has been a change in the opposite direction.

When Mr Blair took office, I perceived a much more optimistic mood. The British economy was performing better. Now things have changed greatly in terms of economic conditions, although the change does not seem as drastic as that between 1973 and 1996. But, may I just add that what has not changed is the excellent relationship between the UK and Japan.

Throughout these years, we have enjoyed friendly ties and many Japanese still regard the UK as a model for the political change that Japan should pursue. That was the case back in the late 1990s and, even at this time of general economic difficulties, we are closely monitoring what sort of reforms this coalition government will undertake and how successful they will be. 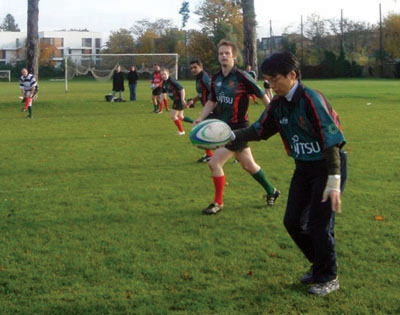 Ambassador Hayashi kicks off the Fujitsu Parliamentary Rugby Cup match between the Commons & Lords RFC and an Embassy of Japan and Japan Society team, in November at Middlesex.

What areas of advocacy would you like to address with the UK government?
We ask that the coalition government, in its efforts to devise a rational and workable policy on immigration, does not impose undue restrictions on the important flow of people between our two countries, including businesspeople, students and people engaged in providing essential services for the large Japanese community, who stay in this country only for limited periods. I want to emphasize this because the Japanese community has contributed enormously to the British economy by creating jobs and buying goods and services.

What can British firms do to improve their performance in Japan or against Japanese firms?
Japan and the UK are deeply involved in mutual trade and investment. Many UK firms, including Rolls-Royce, Dyson, GSK, AstraZeneca, Topshop, Paul Smith and Tesco are enjoying considerable success in Japan, and the number of British CEOs at Japanese firms is increasing. One thing these firms have in common is that they decide on their products, services and marketing activities based on a deep understanding of the Japanese market and consumers, and provide distinctive goods and services that appeal to consumers for their high quality. UKTI and JETRO are providing various services to British firms related to exporting to and investing in Japan. I believe consulting with these organisations is one of the most effective methods for exploiting the Japanese market.

As two tea-drinking island nations who are said to share many attributes, what elements make us polar opposites?
The British may be a little more patient and pragmatic than the Japanese. Perhaps this virtue comes from the difference in the weather. The British have to put up with their dark and wet winter. But in my view, despite whatever differences there are between us, there are so many things we have in common that I simply do not see elements that make Japanese and British polar opposites.

Do you enjoy any “British” things in your spare time?
That’s difficult to answer because there are so many British things to do here. Both the UK and Japan share a “best mix” of history and modernity in terms of culture. In sport alone, I love football and have attended a number of English Premier League games, but rugby, golf, tennis, horse-racing and rowing all interest me, too, and here many of these are historic and of world-class quality. Last November, I even had the opportunity to participate in a friendly rugby match between a team of players from the embassy and the Japan Society against one representing the Commons & Lords RFC, which finished in an honourable draw—a diplomatic solution!

The problem is that I also love opera, ballet, drama, music and many other performing arts. I enjoy visiting museums. The rolling hills and lakes and rivers in the country are so attractive. So I don’t know how to allocate my time properly! I have to add that I am also busy introducing things Japanese to a wider British audience: for instance, Japanese food, ancient culture such as dogu, traditional performing arts such as kabuki, contemporary arts and manga.

What frustrates you about living in the UK?
The main frustration is being unable to enjoy everything because there is so much to do! To be a little more frank, the weather is sometimes somewhat gloomy. In winter I miss the blue skies that one enjoys in Tokyo. (Yet, in the UK I can escape the extreme humidity of Japanese summers!)

How can governments and the people make the ties between Japan and the UK even better?
Both governments are focusing on economic diplomacy. In fact, the very strong, robust economic links between us provide the foundation for our bilateral relationship. I believe we should continue to enhance such economic ties both in terms of quality and quantity in trade and investment. Moreover, at the people-to-people level, I would like to upgrade the already vigorous exchange between our two countries. We are enjoying an excellent bilateral relationship but, as with a personal one, a state-to-state relationship requires constant care. It’s like riding a bicycle. You cannot just stop. Either you halt and fall off or you go forward, and I believe both our countries are determined to advance. In that respect, the embassy has a lot to do and we will continue to do our job in cooperation with the many who share our vision.