Lord Levene of Portsoken visited Tokyo in March to open the new Lloyd’s of London office. After he addressed a BCCJ luncheon on “Fresh Challenges for the City of London” covering a wide range of issues affecting the world’s economies, he was interviewed by BCCJ ACUMEN writer Julian Ryall.

The business and economic news from Britain appears to be mostly doom and gloom; what can be done to lift the country out of that situation?
We must not forget, firstly, that newspapers need doom and gloom to sell copies and, secondly, that there will be a national election in the next few weeks for which reason all politicians are vying with each other. The result of the election is in the balance and the politicians are saying whatever it is that is most likely to get them elected.

I believe the best thing to do is to discount most of that and look at the reality. I don’t think, at the present time, that we are in the depths of despair. The whole world has gone through a very difficult time in recent months, especially the West, but if you go to other countries—the US, France, Germany—then you realise that they are saying the same thing. So we are all in a similar situation. 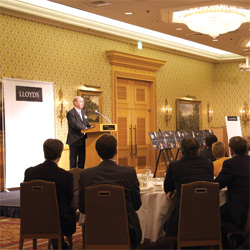 Lord Levene of Portsoken: “Fresh Challenges for the City of London”

I believe that matters are stabilising in the UK at the moment, and that there is a lot to build on. We went through a terrible economic situation, but we have come through it relatively well and I hope that the election is out of the way as soon as possible, that the result is clear and that the new government has the mandate to get on with things and get people to stop complaining.

What are the challenges facing Lloyd’s growth in Japan?
Lloyd’s business today is top-heavy in the US. I would say that 44% of our business is in the US, 22% in the UK, 16% in continental Europe and 8% in Asia. I would like to see our US business continue to grow, but also to shrink as a percentage of our total business. In Asia we are definitely aiming to grow. We are dealing with markets here that are developing very fast, such as China, where insurance did not exist until recently. There is lots of competition in Japan, but we have specialist knowledge and we can use that to help develop our business.

I feel that, generally, in Asia there are good prospects and we are doing the right things to take advantage of that. The one exception is India, where the authorities have been promising for a long time to lift the protection of the domestic insurance industry and liberalise the market, but those promises are wearing thin.

Can you give an example of one thing that Europe did wrong in setting up the free trade zone that is today the European Union, an action that any East-Asian trade organisation should avoid?
Where can I begin? I believe one of the most difficult issues—and one reason there is such opposition in the UK to joining the single currency—was the fact that the euro zone was made up of such diverse economies. The two main tools of economic management are the exchange rate and the economic policy of a country. When those economies are put together, those tools can no longer be used. Although the system can lead to greater protection, it also loses flexibility. The lesson is that countries should think very carefully and factor in some flexibility at the outset.

What is the most complex risk that Lloyd’s is covering at the moment?
That’s difficult because we cover so many across so many areas, but the most famous one used to be Betty Grable’s legs. I think the modern equivalent would be Ugly Betty’s smile. That’s worth a million dollars.

There are indications that Shanghai, Hong Kong or Singapore are gradually taking over Tokyo’s mantle as the financial capital of Asia. What is your view on this and how can Tokyo arrest its slide?
I don’t see it as a case of Tokyo losing out, but more of other centres growing. China was a blank 20 years ago and now it is vying to be the second-largest economy in the world. That does not mean it is a threat; it is an opportunity. In the same way as London is close to other markets in Europe, Tokyo has other Asian markets on its doorstep and can take advantage of that.

What are Tokyo’s strengths as a financial centre?
Tokyo is like London, in as much as it benefits from its longevity; it is one of the world’s three largest financial sectors and this is the world’s second-largest economy. You don’t get to that position without going through the bad times as well as the good times. I believe the scale and size of the financial institutions in Japan will ensure that it stays that way. When it comes to competition, I see it as a very important part of growing.

[greybox]
Lord Levene was chairman of the Docklands Light Railway, chairman and chief executive of Canary Wharf, and served as an alderman of the City of London and as Lord Mayor in 1998 and 1999. He received a knighthood in 1989 and was made a life peer in July 1997.

He has been chairman of Lloyd’s, the world’s leading specialist insurance and reinsurance market, since November 2002, is chairman of International Financial Services London and is a member of the House of Lords Select Committee for Economic Affairs.
[/greybox]