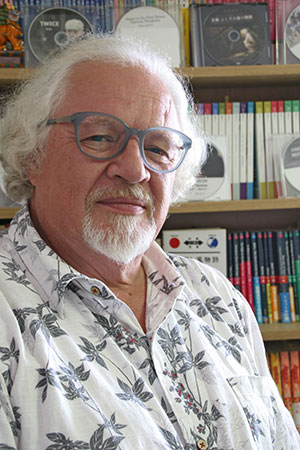 In person, Stuart Varnam-Atkin is recognisable for his shock of grey hair, beard, broadness in the shoulders—and his voice.

For those who tune in to NHK World TV, The Open University of Japan programmes or NHK’s bilingual sumo coverage, it is a voice to remember. He has even featured in Japanese government Internet videos and is the English-speaking guide on the British-built Mikasa in Yokosuka, Kanagawa Prefecture.

Originally from Birmingham, 66-year-old Varnam-Atkin first came to Japan in the 1970s and subsequently worked in a number of fields before setting up Birmingham Brains Trust (BBT) in 1991 with business partner Yoko Toyozaki.

Today, BBT is endlessly occupied with media projects, ranging from translation and narration work in many languages to creative writing and interpreting projects, as well as providing voice training for Japanese actors who need to be convincing with the lines they deliver in English.

Varnam-Atkin’s career path appears to have surprised even him.

“When I was young, I was hopelessly, painfully shy”, he told BCCJ ACUMEN. “But at King Edward’s School we often had to read Shakespeare aloud in class and I gradually became interested in drama. That pushed away my shyness and, for most of my life ever since, I have been doing work that is very public in its nature”.

His interest in drama and poetry continued after he entered Jesus College at the University of Oxford to study geography, but he had little knowledge of Japan beyond watching the films of Akira Kurosawa, Masaki Kobayashi and other Japanese directors. That changed after a chance meeting with a young graduate, from Japan’s Ministry of Foreign Affairs, who was also at Jesus.

“He invited me to a meeting of the Oxford University Japan Society and that was a very significant event, although I didn’t realise it at the time”, said Varnam-Atkin. “I drank sake for the first time, sat next to a charming Japanese lady in a kimono and watched a performance of kendo and iaido by the British national team.

“It was a shattering experience, in a very positive way, and stimulated my interest in Japan”, he said.

After graduating, and with lots of acting experience, Varnam-Atkin admits he was not sure what to do with a geography degree. Opening a copy of The Times—again, quite by chance—he found an advertisement seeking English teachers in Japan.

Varnam-Atkin applied for the job and was accepted, arriving in Tokyo in 1972. He was immediately dispatched to the school’s branch in Osaka and lived in Kobe for two years, soaking up the delights of Kyoto, Nara and the rest of Kansai.

He then returned to the UK and, for 18 months, traced the footsteps of T E Lawrence, another Jesus College graduate, in Arabia. But the lure of Japan remained and he moved back in 1976, keen to return to performing as well as teaching.

The Albion-za recital group was set up in 1979, giving semi-dramatic renditions of works by William Shakespeare, Charles Dickens, Lewis Carroll and many more of Britain’s best-known writers. Its successor, Za Gaijin, also presented original comedy shows on life in Japan, with Varnam-Atkin playing everything from a salaryman to a young girl named Wako Suzuki, complete with beard.

Even though the troupe was becoming popular and appearing on television shows, it was never going to be a big money-spinning enterprise. It did, however, lead to a raft of spin-off opportunities.

“When I was young, I wanted to be a writer or even a BBC radio and TV announcer, so that particular dream was coming true in Japan as I got involved in narrations, radio and TV projects, writing and all sorts of related work”.

Many of the projects were for NHK, but the work also evolved into writing and editing many books on British and Japanese culture, and even translations of manga. They line the bookshelves of the firm’s office in Shimokitazawa in Setagaya Ward.

“My world has always been about words and it has been wonderful that words have allowed me to do so many different things”, he said.

Varnam-Atkin has benefitted from having an indeterminate British accent—managing to avoid any traces of being a Brummie—and has taught many actors, including Yusuke Iseya, Masahiro Motoki and Yukie Nakama how to speak with an authentic lilt for TV dramas.

“I have spent more than 40 years in Japan and I still feel very comfortable here”, said Varnam-Atkin, who is married and has a son at a university in Tokyo.

“It’s difficult to explain why I’ve made this my second home, but one on-going attraction is the tremendous combination of the ancient and modern: the kind of contrast between the local neighbourhood festival and the super high-tech stuff that we see every day”, he said.

“There’s a Japanese phrase that expresses it perfectly; it’s hada ni au, ‘it matches my skin’”.