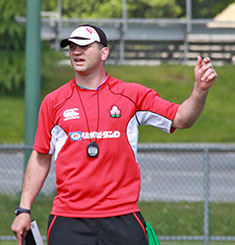 With less than six months before Japan kicks off its first Rugby World Cup (RWC) 2015 match in Brighton, Sussex, Assistant Coach and former England Rugby Captain Steve Borthwick has told BCCJ ACUMEN he is confident the team will be ready.

Having played for six years as a lock at Saracens Football Club under current Japan Head Coach Eddie Jones, the Cumbrian-born Borthwick speaks from experience.

“It’s a challenge [to create a side] when you’ve got people who mostly play for their company teams and then come together in the national team”, he said. “But Eddie is excellent at bringing the group together.

“The players work very hard and Eddie really is a fantastic head coach so hopefully we can perform our best, put on a good show and have a good level of performance”, he added.

Borthwick is pleased with the progress so far and his place in it, while recognising that there is still much work to be done—as the aim is for the team to peak at the tournament.

“It’s a really exciting time for rugby in Japan but also for rugby generally, globally”, he said. “For the Japan side, going from 16th in the world to 9th since 2012, when Eddie became head coach, shows the progress the team has made”.

Borthwick began working sporadically with the Japan side as a spot coach in 2012, before taking up a permanent position coaching the forwards in 2014. Focusing on monitoring and assisting players in their training, Borthwick is working on the development of the team.

He is keen to find different ways to enhance the learning process for players, and uses videos, notes, pictures and an interpreter to carry out previews, reviews and one-to-one meetings.

Aside from the forthcoming rugby world cups, Borthwick said there is much he is excited about. The national side punched above its weight to triumph at home over two Tier 1 teams—Wales in 2013 and Italy in 2014—and attendance at the 2014–2015 season has been the highest recorded in top league history.

This, he points out, is before one considers the impact of the Tokyo Sevens tournament in April, the addition of rugby sevens into the 2016 Olympic and Paralympic Games, and Japan’s announcement that, commencing in 2016, it will have a team in the Super Rugby competition.

As this activity will raise the profile of rugby in Japan, Borthwick is glad the values he learned as a player are helping him with his coaching.

“Right up to the very last day before I retired as a player, I was always learning as a player and as a captain”, he said. “So I have the understanding that, as a coach, I will always be learning”.
He draws parallels between leadership in rugby and business.

“As a captain, I tried to understand personalities and put the systems in place to ensure you get the best out of people”, he said. “That means knowing people and having clarity of purpose: it’s the same in a business environment”.

By instilling these skills, among others, he believes rugby is a sport with a lot to offer, particularly to children.

“It teaches life lessons: dealing with adversity and pressure; understanding teamwork and hard work; the need for mental, physical and moral courage; respect for people; and an understanding of competition”, he said.

With plans for tag rugby classes at schools to help bolster interest in RWC 2019, the opportunity for children to try it might come sooner than had been expected.